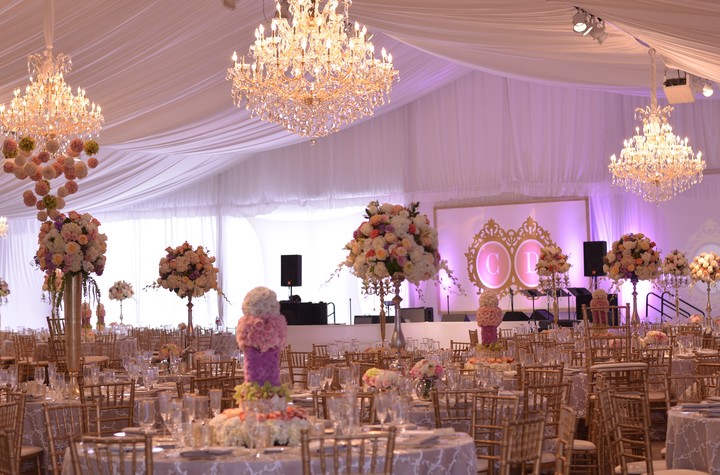 The Spencer/Evans wedding event took place at the Kansas State Alumni Center. The

everything went according to schedule once installation began. With the event being over 100 miles away

from our main commissary, logistics really came into play.

Once the clients RSVP’s returned the number of projected guests rapidly increased. Our large inventory

became key to the support and ease of this event. We sent over 15 semi loads of equipment that supplied

installers for 10 days. In order to make sure there were no glitches on the client’s big day we even

went as far as adding redundant power so that if one generator were to fail, it would immediately

switch to another generator and not affect the party.

staff and management. While installing, our onsite staff learned that the parking lot where we were

alumni center, it then fell under the jurisdiction of the University, which has a different set of fire

inspectors and controllers. The fire inspectors checked on us daily to deliver us with changes that

would need to be made in order to meet their certification. This involved additional rental support

Leveling the parking lot was the first task. We built elevated flooring on the asphalt to house the 82

x 100 clearspan. We built a customized liner to fit the tent based on the placement of the lighting

trusses that were specified for us. After the trusses had been placed and the liner was installed on

Thursday, we learned that the trusses were in fact not in the place they were originally intended to

be. We had to react quickly and send in a team of sewer’s and sewing machines to remove the liner on

Friday, re-sew it, and re- install it. They also had to manufacture several new liners for smaller

tents that needed to be added to appease the fire inspector.

top tents to be utilized for the cocktail hour as well as the after party. The tents included a

doors. We created this customized look on all 17 glass doors before installation the week of the event.